The sun had not yet fully risen when I arrived at Emancipation Park in Charlottesville, Virginia.  It was barely 6:30 in the morning, but there was a large police presence in and surrounding the park already. The main roads had all been shut down, and a sort of box had been created to keep the protesters in and away from the local businesses. The rally was supposed to officially start at noon with a host of different white nationalist speakers, the headliner would be Mr. White Supremacy himself, Richard Spencer.

The park and surrounding streets very gradually began to fill up, at first it was mainly locals stopping by to see if anything was happening yet, but then by around 8:30 a.m. a group of about 40 Militia Men carrying assault rifles and wearing full body armor came marching up a side street. These Militia Men had come to “keep the peace” and positioned themselves at twenty-foot intervals around the park. At 9 a.m. a diverse group of religious leaders arrived walking arm in arm, and in the middle of their human chain walked civil rights leader Cornell West. The clergy men positioned themselves in a single file line on the street facing the park and began to sing “We Shall Overcome”; in a day filled with hate, anger and tragedy, this was a fleeting beautiful moment.

Before long though, the songs of the clergy were drowned out by the loud and ominous chanting of a new group; the white supremacists had arrived. The first group was composed of about 50 white men ranging in age from late teens to early 40s, but the vast majority being in their mid-twenties. They wore white polos and brown khakis, they carried riot shields and clubs, on their heads were helmets and as they marched, they chanted “blood and soil”. They were followed by many other groups of fellow white nationalists, and before long, the park was full of Confederate flags being waved accompanied by the odd Nazi flag. Now I want to make something very clear, there were far more white supremacists than counter protestors, and the counter protesters were by majority middle aged and white.

Around 11 a.m., one hour before the protests were supposed to start, things started getting out of hand. Fights began to break out. A white supremacist rushed a counter protester and started hitting him with his club next to where I was standing, a protester wielding the Confederate flag started spraying pepper spray at the counter protestors in front of him. As I moved to escape the pepper spray that hung in there air, I saw a Nazi run up and punch a woman in the face. I watched in horror as she chased him back into the crowd where she was then pushed to the ground and kicked and beaten. At this point, the first tear gas canisters began descending into the crowd of counter protesters, not from the police, but from the white supremacist groups. The entire time these fights were breaking out, the police stood silently and watched from behind a makeshift barricade; several times while fights were occurring I could distinctly hear counter protesters screaming “do your job!” but their screams fell on deaf ears as they received no help from the police. 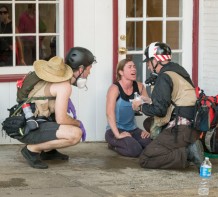 Then at 12:05 p.m., just five minutes after the rally was supposed to start, the Virginia Governor declared a State of Emergency, and the state police and SWAT teams moved in to disperse and arrest protesters and counter protesters alike. So I left. I walked back to my car and began driving back to New Jersey. Then the news came in about 15 minutes after I had left the rally, a man had driven his car into a crowd of counter protestors and then fled the scene. The rest of the drive home I just couldn’t help being so angry and frustrated. How is it possible that in 2017, in an American city, neo-Nazis were able to march and hold a rally and not be met by thousands ––if not tens of thousands –– of counter protesters. My millennial generation is supposed to be the most socially conscious generation yet, where were they? Where were all these “woke” millennials? Why was it that there seemed to be only people my parents age out there protesting? Maybe it’s because their generation and era is one where they actually march for what they believe, not just sitting at home and tweeting or sharing Facebook articles. Maybe if there were thousands of protesters there, the neo-Nazis and white supremacists wouldn’t have felt so emboldened and empowered. They arrived and they saw more people supporting them and their beliefs than denouncing them. There needs to be more than online condemnation of what happened in Charlottesville. I’m not trying to single out those who couldn’t make it to Charlottesville, all I am trying to say is that each person should attempt to do the most that they can to protest this resurgence of hate and bigotry. I say resurgence because it has always been here, however, for some it has been easier to avoid. If posting on Facebook or Twitter is the most you can do, than by all means continue, but if you are able to organize, protest, attend rallies and demonstrations than that’s where you should be and not online.